The nose is made of three layers. From outside inwards: 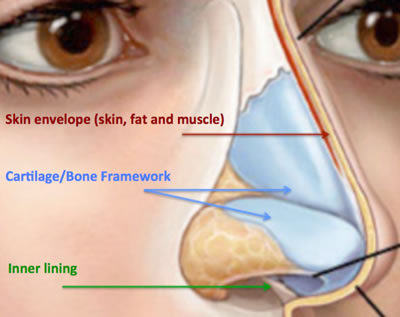 Using the analogy of a house we will explain the layered structure of the nose.

The skin envelope has various thicknesses over the nose. It is thin over the bridge, but thicker over the lower third of the nose. Some patients have thin skin others have thick skin. The skin can be viewed as the cladding or paint that covers the house. If the cladding is thick the underlying structures (cartilages and bone) will be less pronounced. If the cladding is thin the underlying structures will be very visible and small irregularities will be visible to the eye. 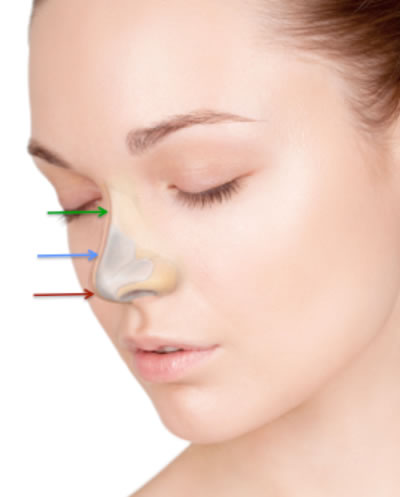 The middle third of the nose is supported by the septum attached to the upper lateral cartilages. These cartilages support the middle portion of the nose. Loss of support here will lead to a saddle nose deformity or in some cases a septal perforation (hole in the septum).

The inner lining of the nose is made up of skin and mucosa. It is a vital layer of the nose and can be viewed as the foundation of the house. Any deficiencies (tears or gaps) allow bacteria normally carried in the nose to infect the middle framework layer of the nose and can cause damage to the cartilage of the nose and weaken the support structure. In addition when these gaps heal, they heal with scarring and contraction that causes the nose which is mobile to become twisted with the nostrils becoming narrowed, which can impair breathing and produce an external nose deformity. This is analogous to faulty foundation in a house leading to subsidence.